If you watch network TV or live stream web shows, chances are you’ve seen the Lighting Design Group (LDG) at work. The multiple Emmy award-winning New York firm is responsible for lighting a broadcast news and entertainment-oriented shows — and permanent or on-location studios — on ABC, CBS and CNN to Fox, NBC, CNBC, MSNBC, MTV and more. From freezing at the Winter Olympics to cruising under the Atlantic in a submarine, the team conquers every lighting challenge that comes their way.

A new opportunity comes in the form of LED lighting. How well does it work in the broadcast world? LDG’s president Steve Brill, executive VP of design Dennis Size and senior lighting designer Mike Grabowski shared their view through the lens.

PLSN: What are some common challenges of lighting for the camera?

Steve Brill: The biggest challenges are interpreting and coordinating the look with the director, producers, scenic and lighting designers. They don’t always agree. It is our job to interpret what everyone is seeing in their mind’s eye and create that look.

Dennis Size: The most difficult challenge is accumulating the information required to create the design, such as: what are the scenic elements, how are the shows being conceived, where are the talent positions, where will the camera positions be, what is the budget, to getting the lighting instrumentation required to do the project properly.

Mike Grabowski: It’s a balancing act of creating an environment, breathing life into the air, but balancing the needs in the room with the needs of the camera. The camera is the most important viewer — it impacts lighting and color as much as anything else — but if it needs to be bright, we need to ensure the audience isn’t squinting, or if it’s a concert, we need to help keep up the energy.

PLSN: How does lighting for a TV news set compare with other televised events?

Dennis Size: Basically it’s “same trailer, different park.” There’s no room or time for error or experimentation. The designer needs to be “on his toes.”

Mike Grabowski: I straddle the line between entertainment shows and news. Town halls hurdle both. Those locations aren’t set up for a broadcast, so creativity in lights, placement and usage is crucial. Entertainment-oriented programs means strange requests aren’t out of the norm: “Make sure we have a lot of light in the air, so when we shoot the squid out of the cannon we see it.” or “We’re doing a Downhill Drag Race on Aspen Mountain, there is no way to get power up there, and the sun will be rising behind the mountain when we shoot it.” Requests are more straightforward on a news broadcast: “Let’s make the colors punchier” or “We may have a small marching band show up.”

Steve Brill: News is traditionally flat and boring. It’s easy to play it “safe,” to light everything broadly and flatly. But that is not what we stake our reputation on. We make it exciting and different, and push the envelope.

PLSN: What qualities do automated fixtures need for broadcast?

Mike Grabowski: Color quality and product consistency are hugely important. Also, cameras have gotten faster — so, brightness is a secondary priority to the refresh rate (which translates to flicker on camera) and low end dimming curve. Having steppy dimming at the low end can be a nightmare. Similarly, having a slow PWM (Pulse Width Modulation or digital signal) that can’t be sped up means you may see “striping” on camera that makes the fixture unusable.

Steve Brill: Intensity, beam shaping, color accuracy and reliability. Manufacturers like to squeeze as many features as possible into their fixtures. We really only need 25% of the features, but that 25% is critical, and they have to work every time.

PLSN: When and why did you start using movers in broadcast events?

Dennis Size: In 1992 for the ABC News Presidential Election Headquarters live from Studio 1 in NYC. The weapon of choice was the [Vari-Lite] VL4. Anchorman Peter Jennings walked all over a large studio and the producer/director wanted him to go wherever and whenever he wanted — without the studio flooded with light, looking like a Home Depot. At the same time, I started using the [High End Systems] Intellabeam to augment concert performances.

Steve Brill: In the early 2000s, movers were not reliable. We often had a “moving light hospital” backstage, and so they became more of an accent. Now they are reliable, accurate and bright, so they can be used to light every aspect of a show.

Mike Grabowski: I’ve used moving lights regularly on jobs since early 2000. In shows that need output and flexibility, movers are invaluable. They are and were always an integral part of MTV’s TRL — movers give a dynamic energy to the room, but I also use them in more unexpected places like town halls and reunion shows. A few used as key lights means that if a position needs to move at the last second, it’s just a few button pushes to execute, instead of a ladder, lift or climbing the truss. The newer adventure is using them as key lights — and the SolaSpot 1500 changed my mind about that when it first came out. I was blown away with how well it would mix and match with incandescent fixtures. When Good Morning Football launched its first location at the CBS Broadcast Center, we needed a few moving lights to give us color, pops and gobos, but also serve as a key light. Although our rig was almost entirely incandescent then, we popped them in and even the video engineer couldn’t tell the difference — to the scope or to eye. So really, the brightness and color mixing have made moving lights more viable as a talent light.

Dennis Size: The High End Systems Sola Series has consistently met and often exceeds my expectations when lighting on-camera talent. Once the SolaFrame 750 came into my life, I look nowhere else for a moving fixture.

Mike Grabowski: The Sola Series has always been great and almost always hits the metrics above — color, consistency, and, with the LED fixtures, good refresh rate. High End Systems also comes out with some delightfully weird and unique lights and I like to try them all. I’ve also leaned on Chauvet Pyxis — they have a neat direct view aspect, but work well as a wash unit, and in smaller rooms, work great as a single tight beam. In the right scenario, I love to use products like the CITC Maniac. It presents something unique if you need a CO2 effect, and want to paint it with LEDs. GLP X4s are invaluable in town hall and reunion show scenarios. These tiny, nimble, relatively inexpensive fixtures with good color and editable PWM (Pulse Width Modulation) allow us to refocus on the backgrounds without interrupting the flow of a camera look. The benefit is the remote focus ability.

Steve Brill: I love the Sola Series fixtures. They come in a variety of sizes suitable for many different-sized venues. They are bright, accurate, and reliable.

Steve, how has automated LED lighting solved your recent challenges?

Steve Brill: CNN recently relocated their New York studios to Hudson Yards. One of the studios was designated as a production studio for town hall-style events. We equipped it with a large automated fixture package of SolaFrame fixtures so the studio can be quickly repurposed for almost anything.

PLSN: LDG counted heavily on automated lighting for this year’s string of presidential debates. What issues did it solve?

Steve Brill: We lit the first presidential debate on NBC this summer. The venue, really a concert hall, had few “television friendly” lighting positions. As a result, our key light position was 115 feet away. This would have been close to impossible to light using 5-degree lekos. At that throw, if somebody sneezed, the light would shake. The SolaFrame 3000 was suitable for that task, and it worked beautifully.

Dennis Size: At the third presidential debate in Houston, the arena was massive, with throw distances averaging 150 feet and truss trims vertically at 40 feet. There were several dozen conventional tungsten and LED fixtures (ellipsoidals/PARs), but little time to focus and re-focus. Plus, there were not only serious structural weight restrictions in the facility, but also serious power problems. The original plot of over 500 tungsten fixtures had to be minimized. Even using LED replacements for fixed focus units had to be minimized because snorkel lifts and personnel lifts couldn’t be used on the stage floor due to floor support weight restrictions. The only possible solution was LED moving lights, which can also multi-task. The rig used over 350 moving lights, almost all being HES SolaFrame fixtures.

Dennis Size: In 40 years, the most consistently memorable ones have been with the Oprah Winfrey Show.

Steve Brill: I’ve lit three Presidential funerals and the challenging question is always, “Is it a funeral or is it a TV show?” The answer is both. Then there was a show on an aircraft carrier, and one on a submarine. We had to be truly self-contained.

Mike Grabowski: NBC’s Commander-in-Chief Forum on the USS Intrepid (aircraft carrier) was great — not the least of which is because it was promptly parodied on South Park. (They even got the accent lighting on the planes correct!). I’m now prepping for another year in Times Square for Dick Clark’s New Year’s Rockin’ Eve with Ryan Seacrest — to which Dennis handed me the reins years ago.

Steve Brill: The addition of shutters to a profile automated fixture was a huge game-changer. All of a sudden, it can replace most any fixture. LED sources are the second game changer: less power, no worry about lamp life. Going forward, movers need to get smaller, lighter and cheaper.

Dennis Size: I’d advise designers to understand how light “works” and how to manipulate and use all of its ephemeral and beautiful qualities. Focusing on traditional “tools of the trade” is a trap to avoid.

Mike Grabowski: This is a goofy thing we get to do for a living, but man, is it fun to share. Current movers are awesome, but don’t be afraid to get weird. Experiment. Heck, a hit show that’s currently on the air was lit for its first three or four seasons primarily with clip lights. And tools aren’t a replacement for design or choices. It really is all about the right light in the right place. 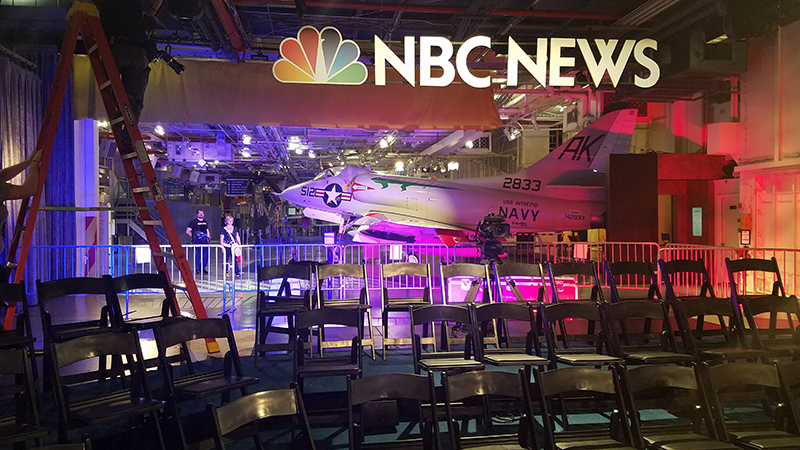 NBC’s Commander-In-Chief Forum on the Intrepid in 2016 was parodied on an episode of South Park, complete with lighting angles on the planes. Photo by Mike Grabowski/LDG.